The Death Penalty and its Effects on Married Couples and Families In terms of judicial punishment, it doesn’t get any realer than the death penalty. Capital punishment is currently legal in 31 states. In 2015, 28 death row inmates were executed across six of these states. Although many might say that justice was served in terms of the victims and their families, justice was certainly not served when it comes to the executed prisoner’s family. Spouses and children suffer the most when an execution takes place. It’s understandable that some crimes are worthy of capital punishment. However, that doesn’t make the fact that a family member is now dead any easier to handle. 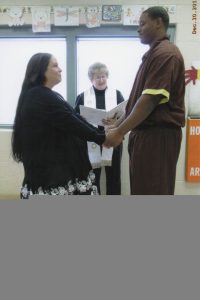 Oklahoma is a state that carries the death penalty as a form of punishment. Wedding ministers in Oklahoma City have performed marriages for death row inmates a handful of times, because their fiancées wanted to feel the connection that marriage brings to a relationship before their partners are executed. It’s sad that America has come to this. What’s even sadder is that if the inmate doesn’t win his or her appeal to overturn their death sentence, a newly married spouse will be left a widow/widower.

There is an even bigger crisis at hand if the death row inmate has children. Can you imagine not only having your father or mother incarcerated for a heinous crime, but then having to deal with the emotions that come with said parent being put to death? Children of death row inmates range in ages. Try explaining this to a small child. It’s impossible, and it’s heartbreaking.

Marriage officiants in OKC will gladly join a death row inmate and his or her fiancée together in holy matrimony. However, there is a current struggle within the penal system that has put all prison marriages in Oklahoma on hold, due to the state still lobbying to legalize same-sex marriage. So once again, those wishing to marry a death row inmate have been foiled by the system. Unfortunately, by the time the state lifts this hold, it could be too late for some couples.

During normal prison wedding procedures, inmates and their new spouses are allowed a supervised, no-contact visit for 30-minutes after the ceremony. Wedding ministers in Oklahoma City will stay present during this time should the bride and groom desire their presence. In some circumstances, a few extended family members are allowed to attend the service.

There are six states in the union that allow conjugal visits for married couples: California, Connecticut, Mississippi, New Mexico, New York, and Washington. As you can see, Oklahoma isn’t one of them.

Let’s recap, shall we? Oklahoma’s death penalty laws are as follow:

The question to ask ourselves is, “Are Oklahoma death penalty laws cruel and unusual punishment for the family members of the condemned?” We’ll let you answer that for yourself.